A Lovely New Stadium for Brighton 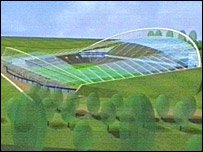 So finally, Brighton & Hove Albion has planning permission to build a new 22,000-seat stadium. The farcical background to this saga, is that the previous club board decided to sell their previous stadium and land to allow the development of a rather large toy shop! That was eight years ago and since then, they have been ground sharing with a health club.

Roll the clock forward to 2005 and now the club has permission to build a contemporary new stadium with an estimated development cost of £50 million. Will they consistently fill 22,000 seats? Who knows? Does it have a commercially sustainable future? I’m unconvinced…but let’s not get into the detail, for in 2008, Brighton will have a facility comparable to the Telstra Stadium in Sydney and won’t that be a thing.