Samsung and Adidas launch a phone with a heart beat 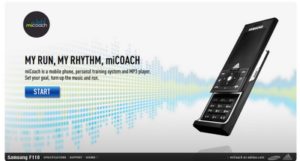 Not wishing to be left behind by the Nike and Apple partnership, Samsung and Adidas have launched the new miCoach system.

miCoach captures and shares running data via the Samsung phone. Heart rate is monitored when the user wears the supplied heart rate belt.

What’s in the box?

How does it work?

Slip on the heart rate belt, clip the foot pod on your shoes, power-up the Samsung phone and the system is ready to go.The miCoach software which is installed on the phone takes the user through their first run which forms the basis for a programme. miCoach provides audio cues to keep a user on pace and in a target heart rate zone throughout the run.The system captures pace, distance, calories, stride and heart rate. Following the run, users upload their data to the miCoach web site, via a usb connection. Once uploaded, progress can be tracked and shared with other users. Running data is then graphically displayed.

It will be interesting to track what momentum miCoach generates over the coming year and how it fairs against the other activity tracking systems that are now being launched. I would love to hear from anyone that has personally used this system.