The emergence of budget health and fitness clubs 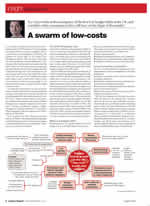 Ray Algar looks at the emergence of the first true budget clubs in the UK, and considers what consequences they will have on the shape of the market.

I can vividly recall the discussion with the then chief executive of Holmes Place. “I’ve put together an exciting deal for a purpose-designed club to form part of a new development in Newbury. The numbers are good; what do you think?” After reflecting, he replied: “We can’t open in Newbury; the town already has a private health club.” A few years ago, that was the unwritten market rule; the first to enter, won. Why waste resources competing? Let’s just find our own town. How quickly the rules of the game change. Now clubs stand side-by-side and compete hard, and not just small clubs. Some towns now have two £13m+ health and racquet clubs within a mile of each other. ‘If the town is good enough for them, it’s good enough for us’, became the new mantra, as chains rushed to build a national estate. As competition intensified, one rule seemed to remain constant. Prosperous consumers joined the premium clubs, while those of moderate financial means frequented the ‘affordable’ private mid-market club or leisure centre. However, everyone is now well aware that the principle of neatly-defined homogeneous consumer segments is now in turmoil, causing marketers sleepless nights. Promiscuous buying behaviour is everywhere, where shopping at Lidl now suggests, more ‘smart’ and ‘savvy’, than skint.