Welcome to the future – Ray Algar 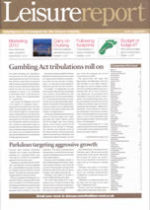 ‘My flight to Copenhagen has just been cancelled; the SAS cabin crew are striking’. The well-dressed business traveller placed his phone back in his top pocket, shrugged his shoulders and drifted away. Attending the Copenhagen Institute of Future Studies annual conference: Dontstop02, was looking shakey. Fortunately, the strike was in its first few hours and some flights, mine included, were still departing from Gatwick. The trip back however, was a whole new adventure. Of course, the really-good futurists would have anticipated the strike and travelled by sea. The term ‘futurist’ is really a misnomer. They don’t look into glass balls and make predictions; instead they study life and create plausible perspectives about how life may change. If I were a Futurist, I would cross this term out and put ‘Opportunity Finder’ on my business card.

During the flight, I was thinking about the conference theme: ‘Don’t stop thinking about tomorrow’ , and the background of delegates. Was the conference gong to be filled with several hundred practising ‘futurists’, or senior executives seeking a better understanding of applying the principles of ‘foresight’ to their organisations? Refreshingly, it was the latter. Breakfast was spent with a Danish animal fur broker. ‘How’s business?’, I asked, expecting her to lament its terminal decline. ‘Never been better’, came the upbeat reply as it transpired that they were the world’s largest fur skin house and could not keep up with demand from China. She went on to explain that the vociferous UK animal rights movement was far-removed from Danish sentiment, where fur skins represented a major part of Denmark’s GDP. Sensing that conversation was now pretty well exhausted, I found a seat among the 240 delegates and awaited the opening remarks from Johan Peter Paludan, Director of the Copenhagen Institute for Futures Studies.